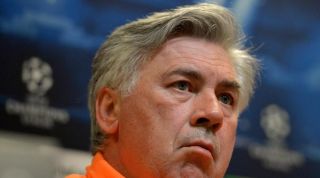 The Italian is currently among the favourites to fill the vacancy after Moyes last week paid the price for a disappointing season that has seen United fail to qualify for the UEFA Champions League and meekly surrender the Premier League title.

Ryan Giggs has taken on the role of interim manager at Old Trafford, but Ancelotti - preparing for Tuesday's second leg of a Champions League semi-final tie in which his side lead reigning champions Bayern Munich 1-0 - stressed that his long-term future is with Real.

"I respect everyone," he said. "I haven't had contact with Manchester United.

"I want to stay at Real Madrid for a long time.

"It's strange to discuss my future in the middle of a Champions League semi-final."

Ancelotti has previous experience of managing in the Premier League, having led Chelsea to a Premier League and FA Cup double in 2009-10.