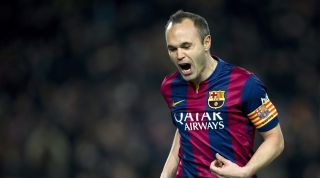 Luis Enrique says Andres Iniesta is the player he has managed who gets closest to Lionel Messi.

The Spain manager won two La Liga titles and the Champions League during his time in charge of Barcelona.

The former midfielder has also bossed Roma and Celta Vigo since hanging up his boots in 2004.

And while he acknowledged that Messi is the most talented footballer he has coached, Luis Enrique has revealed that Iniesta was the best of the rest.

"The player that impressed me most in my career, I don't know if you mean being myself as a player or as a coach or both, without doubt is Leo Messi," he said," he said on Facebook.

"Afterwards, I can say that Andres Iniesta is close to something similar to Leo Messi. But Messi is hugely different in respect to the others."

Luis Enrique also explained how he used to coach Messi, admitting that it is impossible to offer him advice on his technique.

"How do we train Leo Messi?" he added. "There is a little bit of everything. I cannot tell him how to dribble or how to pass or shoot because he is an artist at those things and it’s clear that we don’t have to advise him on these topics.

"But things relating to the systems we use, situations or things as a more general level that benefit us, for sure we tell him.

"How to create pressure in a certain way, where do we want the ball, what spaces on the pitch should he be taking up to try to receive the ball... we tried to influence him regarding all those things."

Luis Enrique stepped down as Spain manager in June 2019 due to personal reasons, but returned to the position last November.

UEFA announced earlier this week that Euro 2020 has been postponed until next year due to the coronavirus pandemic.