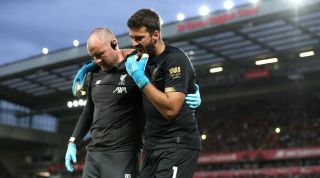 The Brazilian was substituted during Liverpool's 4-1 victory over Norwich after injuring his calf.

Jurgen Klopp is awaiting the results of a scan which will determine how long Alisson is out for.

And if the former Roma shot-stopper is sidelined for a number of weeks, Liverpool could sign Lonergan as back-up to Adrian.

The 35-year-old free agent spent part of pre-season with the Reds following his exit from Middlesbrough at the end of last season.

Klopp has already confirmed that Alisson will not travel to Istanbul for Wednesday's Super Cup clash with Chelsea.