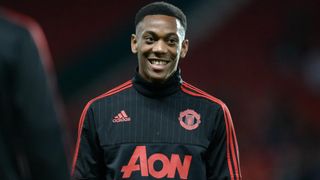 France international Martial has been a revelation since arriving from Monaco in a surprise deal worth an initial £36million in September, scoring 12 goals in all competitions.

Martial's exploits have attracted widespread praise from Van Gaal and others, but the 20-year-old is not immune from the Dutchman's fiery side, though he does not take it to heart.

"He yells at me," Martial told RTL. "It makes me laugh because I know it's for my own good."

Of former coach and Monaco boss Leonardo Jardim, Martial - who came off the bench and set up Blaise Matuidi's 88th-minute winner in France's 3-2 win over Netherlands on Friday - added:  "He was very hard with me - that's what I needed."

United remain in the hunt for Champions League qualification as they sit sixth in the Premier League, just a point adrift of fourth-placed Manchester City.