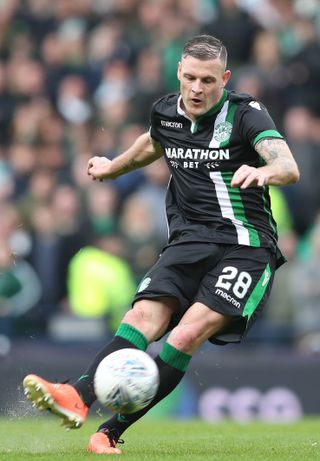 Anthony Stokes feels his football travels were a good life lesson but he is glad to be back in more familiar surroundings and eager to contribute to Livingston’s continued progress.

The former Celtic striker returned to Scottish football last week following spells in Greece, Turkey and Iran since ending his third spell with Hibernian in January 2018.

The 32-year-old’s second spell in Iran, with Persepolis, ended as the coronavirus pandemic took hold in the country and he is relieved to be back on more familiar ground.

Stokes said: “I enjoyed the little trip away for a couple of years but the lifestyle was quite difficult and I feel much more settled here and I’m just looking forward to get back playing football.

“I have to say I enjoyed the football side of it, and the people, they were great people. But culturally it’s quite difficult for someone like myself to move out there.

“I found it difficult but I think it’s been a good experience, a good life lesson in a way to put yourself out of your comfort zone. I enjoyed the football side of it but I’m glad to be back.

“It’s difficult when you’re in a dressing room and you’ve got an interpreter and you can’t get the same sort of banter with the lads as you get at home. That’s one of the things I really missed.

“It’s hard to really bond with people on a certain level with the language barrier and culturally there was a lot of differences as well. But it was a good experience and I’m glad I did it.”

The former Arsenal trainee made his name on a prolific loan spell with Falkirk and admits Scottish football has always been a place where he feels at home.

“That’s a big part of it, I have always felt comfortable playing here and I have played a lot of my career in Scotland, and had a lot of successful spells with Hibs, Falkirk and Celtic,” the Republic of Ireland international said.

“I have friends and family here, I am much closer to my family, so everything about it was an easy decision, especially after a couple of years away.

“I wanted to be based where I was comfortable again, it’s close to Glasgow.

“Listen, it’s a very well-run club, they had a great season last year finishing fifth and I think it’s a club on the up, I really do. I just hope I can play my part.”

Stokes’ latest spell at Easter Road ended following some disciplinary issues and he hopes Livingston fans judge him for his performances.

“Throughout my career there has always been off-the-field issues and a lot of the time they can be blown out of proportion as well,” said Stokes, who hopes to make his debut in Saturday’s Scottish Premiership visit of Ross County.

“There have been bits and pieces but my job is to play football and act as professionally as I can around the club and on the pitch and score goals and help Livingston as much as I can.

“That’s all I am focusing on and I just hope the fans judge me on the pitch. Everything outside of football is my personal life and for me to deal with.

“I need to come here and prove myself in football terms and that’s what I plan to do.”