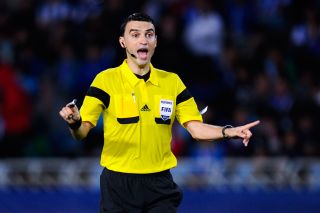 The Manchester City midfielder was targeted by a section of home supporters during Wednesday's UEFA Champions League clash in Russia, a game that the former Premier League champions won 2-1.

Toure signalled to Hategan after hearing the taunts, but the game continued regardless, a decision that has placed the Romanian official in the spotlight.

Kick It Out, the anti-racism group, have condemned Hategan for failing to stop the match and called for UEFA to take swift action against the Russian champions, with the player himself doing likewise directly after the final whistle.

"First and foremost the support of Kick It Out is with Yaya and everyone associated with the club," said a Kick It Out statement.

"He has been brave and proactive not only by speaking out after the game, but by reporting it to the referee too.

"It was the referee's role to then stop the game which would have dealt with the problem instantly. This was a key failing.

"When abuse is officially logged like this, the offending club should be charged and an automatic partial stadium closure by UEFA can be explored. A second offence could mean a full stadium closure.

"Things are not perfect in this country (England). But this type of abuse is a depressing throwback and raises questions around the suitability of Russia as World Cup hosts."