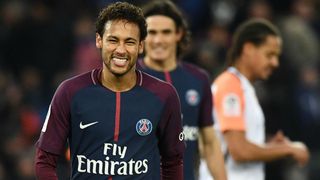 Barcelona coach Ernesto Valverde would not be surprised if Neymar joined Real Madrid, suggesting "anything is possible in the world of football".

Neymar left Barca for Paris Saint-Germain in August for a world-record €222million fee, with the Catalan giants left helpless because of his release clause.

It has been said that Neymar made the move in order to boost his Ballon d'Or chances by moving out of Lionel Messi's shadow, but ever since leaving Barca he has been linked with a future move to their bitter rivals.

Reports claim Madrid are planning to replace Cristiano Ronaldo with the Brazilian star and, although Valverde says he does not care about the situation, he concedes the move would not necessarily shock him.

"I don't know," he told reporters at a news conference ahead of Sunday's LaLiga clash with Alaves. "Who knows what can happen in football.

"But if there's a world where strange things can happen, it's the football world. But that's not something I'm worried about. I've enough to worry about here at Barca."

It is a common thought that Neymar's departure helped Barca's style of play become more disciplined.

Valverde agrees that Barca would probably play differently had Neymar stayed, though he was eager to not downplay how sizeable a loss he has been.

"It would be difficult to work out what we'd be like with Neymar," Valverde added. "That would be a strange exercise.

"The loss of a player of Neymar's quality is always great, but we're still scoring goals. Perhaps there are certain players who are here now that wouldn't be if Neymar was still here.

"We've re-structured in defence too, but that goes through the team through to the attackers.

One beneficiary of Neymar's exit is Philippe Coutinho and Valverde praised the former Liverpool star, while also suggesting he could potentially be paired with Andres Iniesta in midfield, rather than one or the other playing.

Valverde: "Coutinho and Iniesta are different players, but they can play together and complement each other perfectly." January 27, 2018

"Let's see [how we play Coutinho]," Valverde said. "We need to learn how he plays in our system and he needs to learn how to play with his team-mates.

"He's different to any player we've got. Iniesta is perhaps more of a central midfielder, whereas Coutinho has maybe a better shot and plays further up.

"He has a certain elegance. I think we could play him in midfield. He doesn't need to change much to fit in.

"I think they [Coutinho and Iniesta] are different types of players, but also complimentary. They could play together perfectly well. They can play in the same position, but let's see how things develop."