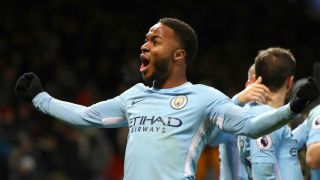 Pep Guardiola would welcome Raheem Sterling penning a new contract at Manchester City and knows the winger's form could attract the attention of rival clubs.

Sterling joined City from Liverpool for £49million in July 2015 and has flourished under Guardiola's leadership this season, scoring 20 goals in all competitions for the runaway Premier League leaders.

The 23-year-old has often grasped for his best form on the international stage but turned in a superb display during England's 1-1 draw against Italy in midweek.

Sterling has two years left to run on his current deal but is reportedly keen for talks over fresh terms to commence, with team-mates Kevin De Bruyne, David Silva, Fernandinho and Nicolas Otamendi having all been rewarded with renewals this term.

Speaking ahead of Saturday's trip to Everton, Guardiola maintained the matter was one for director of football Txiki Begiristain but underlined Sterling's importance to the City cause.

"In terms of contracts I am not the guy. Txiki is talking about that," he said

"No doubt, it is so important [City keep Sterling]. But the deals are the deals. The agents, circumstances, maybe other clubs are interested in him.

"So anything can happen but he knows how important he is for us."

Sterling's international team-mate John Stones will miss out on his latest return to Everton after suffering concussion against the Azzurri but another City player to have enjoyed a more profitable time away with his country is Gabriel Jesus.

The Brazil striker scored the only goal as Tite's side beat world champions Germany 1-0 in Berlin and he is likely to start at Goodison Park with Sergio Aguero's ongoing knee complaint making City's top scorer a major doubt.

"It was so important for him," Guardiola said. "He was a long time injured and a striker needs goals.

"With the problems we have right now with Sergio (knee injury), Gabriel's confidence is so important."

Guardiola was on the end of a chastening 4-0 hammering at Everton last season and he insists Sam Allardyce's men will not be overlooked ahead of a Champions League quarter-final against Liverpool to be played out either side of a potentially title-clinching derby showdown with Manchester United.

"It's not already done and to prepare the next games in the Premier League and the Champions League is to be ready immediately," he added.

"Believe me, I have prepared Everton like it is the most important game we have to play. My decisions are to win at Everton, not, 'oh, these guys aren't going to play', thinking about Liverpool.

"That would be a big mistake from my side."