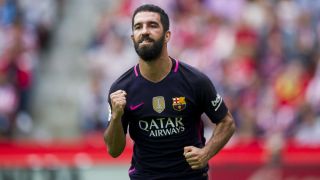 Arda Turan has ruled out the prospect of leaving Barcelona for Galatasaray before the Turkish transfer window closes on September 8.

The 30-year-old is yet to make a first-team appearance this season and has been linked with a move back to the Super Lig since Paulinho's €40million arrival from Guangzhou Evergrande Taobao.

However, the Turkey star – who has been named in Barca's 25-man squad for the Champions League group stage – insists he intends to honour his contract, which expires in 2020.

"I'm staying," he told Beyaz Futbol. "I'm very happy here and I have a contract for another three years."

Arda also made it clear that a return to Turkey would be impossible at present given the treatment he would expect to receive from supporters.

The former Atletico Madrid man was the subject of heavy criticism following an altercation with a journalist on a plane, which caused him to announce his retirement from international duty - only to reverse that decision last month.

It is also believed that his public support of president Recep Tayyip Erdogan has caused division among groups of fans.

"Galatasaray is my home but I know they don't want me now," he said. "I don't want to harm the team."