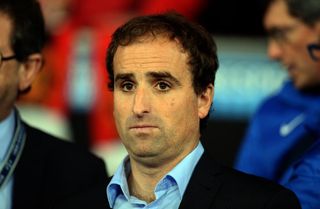 Heading to Old Trafford on the back of consecutive Group A defeats, Sociedad suffered the worst possible start when Wayne Rooney's shot came back off the post and Inigo Martinez put through his own net after just two minutes.

The visitors eventually rallied and Antoine Griezmann and Alberto de la Bella both struck the crossbar as United suffered some nervy moments, but had any of the late chances that fell to Rooney, Antonio Valencia, Shinji Kagawa and Ashley Young been converted it would have leant a more accurate slant to the scoreline.

The Sociedad coach admitted that his side had contributed to their own downfall.

"Life is difficult when conceding so early," he said. "It was a disastrous goal to concede.

"It was a fair result. We did not really deserve a draw."

Arrasate accepted that the result makes qualification realistically out of reach for his players, but he wants them to continue battling for third place and a spot in the UEFA Europa League.

He also praised Sociedad's supporters for standing by the team during a difficult run of form and hopes last weekend's first La Liga win in eight attempts at Valencia is backed up with a home triumph over Almeria on Sunday.

"There are three games left and we have to win then all as third assures us of a place in the Europa League," Arrasate added on the club's official Twitter page.

"But the most important thing now is to recover ahead of the match against Almeria.

"The fans have shown exemplary behavior and the team thanks them.

"We are proud to have this job and it gives us shame not to give them anything."