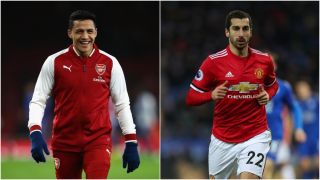 Arsenal and Manchester United have agreed a swap that sends Alexis Sanchez to Old Trafford and Henrikh Mkhitaryan in the opposite direction.

While Sanchez has committed his future to United, Mkhitaryan has put pen to paper on a long-term contract at Emirates Stadium. The deal reportedly does not contain any transfer fee.

Arsenal were said to be asking £35million for their star forward but have ultimately accepted a trade for the Armenia international to avoid getting nothing for Sanchez, who could have left for free at the end of his deal in June.

Sanchez was tipped for a reunion with Pep Guardiola at Manchester City, but the runaway Premier League leaders dropped out of the race for his signature amid rumours of concerns regarding the financial package.

With Antonio Conte stating he did not think Chelsea were looking to sign the 29-year-old last week, United became the clear favourites.

Sanchez scored 60 goals in 122 Premier League appearances for the Gunners, who he joined from Barcelona in 2014.

He won the FA Cup twice at Arsenal, scoring in a 4-0 victory over Aston Villa in the 2015 final and netting the opening goal in the 2-1 triumph against Chelsea last season.

The arrival of Mkhitaryan helps compensate for the loss of Sanchez.

Mkhitaryan struggled to establish himself in Jose Mourinho's first team following a reported £26.3m move from Borussia Dortmund in 2016.

The 29-year-old made 22 appearances for United in 2017-18 but only completed the 90 minutes on two occasions, the last of which came at home to Basel in the Champions League on September 12.

Despite Mkhitaryan's arrival at Arsenal, the departure of two-time Copa America winner Sanchez is likely to increase scrutiny on the contract situation of Mesut Ozil, whose deal will expire in June.

The Gunners are said to be pursuing Dortmund striker Pierre-Emerick Aubameyang. However, it is believed they are yet to meet an asking price of in excess of £50m.