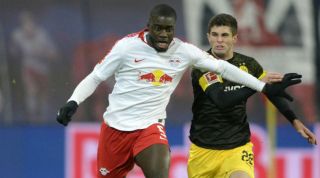 The Bundesliga outfit were thought to be holding out for the 20-year-old's release clause.

At the time the clause was believed to be between £72 million and £92 million, though the actual figure remained unclear.

Arsenal were desperate to shore up their defence and were seemingly ready to spend big to do so – Unai Emery's biggest problem at Arsenal has been conceding shots, with defensive changes unable to find a solution.

The Gunners ended up calling time on their pursuit of Upamecano and signed David Luiz from Chelsea for £8 million instead.

But the Brazlian has been unable to plug the leaky hole in Arsenal's defensive line.

Arsenal fans point toward Rob Holding's return as a cause for optimisim, but the Englishman will take time to reintegrate fully into the first eleven.

Their other centre-back signing was 18-year-old William Saliba, who was sent traight back on loan to Saint-Etienne, following the completion of his £30 million move.

Saliba and Upamecano have, in fact, played together before - for the French under 21 side.

Both players have also struggled with knee injuries this season - Upamecano only returned to action recently.

But Arsenal are thought to remain keen on the Frenchman and their luck could be in as Upamecano's release clause reportedly drops next summer.

L'Equipe (via The Sun) claim that the clause could be as little as £53 million – less than Arsenal are believed to have bid last summer.

Leipzig are hoping they can persuade Upamecano to sign a new contract over the next few months.

By doing so, they would prevent themselves from losing a prized asset for what would be a relatively low fee in today's market.

However, the German club will be hoping Upamecano's head hasn't already been turned by Premier League interest.

Quiz! Can you name every player from a Champions League Squad of the Season since 2016/17?