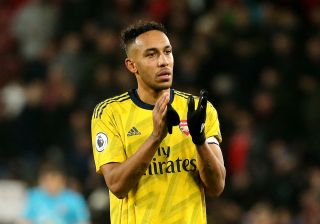 Aubameyang has 18 months left on his current Arsenal deal and has yet to show positive signs regarding signing an extension.

He's already notched 14 in the Premier League this season, despite being suspended of late.

Aubameyang's rumoured to have attracted interest from across Europe as a number of clubs go hunting for a proven goalscorer.

One of those clubs is believed to be Barcelona and, according to The Telegraph, they may make a move for Aubameyang before the January window shuts.

The Catalan club are in need of a striker following the injury to Luis Suarez which will reportedly keep him sidelined until May.

Barcelona have identified Aubamyang as the ideal replacement but realise it will not be easy convincing Arsenal to let go of their captain, and main source of goals, midway through a season.

The 30-year-old made a defiant statement in his programme notes at the beginning of the month, indicating the rumours of his departure were all noise.

"I would also like to react to some of the rumours that are going around about me in the media," he wrote.

"People like making up stories and they should focus on what’s happening on the pitch. They talk too much and it does my head in!

"I am the Arsenal captain. I love this club. I am committed to it and desperate to bring it back to the top, where it belongs."

If Barcelona are to hit a brick wall with Arsenal and Aubameyang, then it's reported that they shall look to Valencia's Rodrigo Moreno instead.

The 28-year-old has four goals and 10 assists in all competitions so far this season and may offer more of a creative style in the centre-forward position.