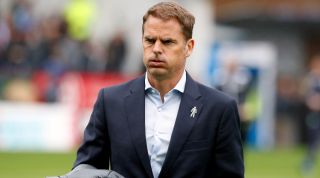 The former Real Betis manager replaced Steve Clarke at the Hawthorns but was sacked in May of that year after West Brom limped to a 17th-place finish, three points above the relegation zone.

Known for an expansive playing style in Spain, Mel’s Baggies tenure was beset by off-the-field issues like the sacking of Nicolas Anelka and a dressing room bust-up involving Saido Berahino and James Morrison.

The football wasn’t great either – West Brom won just three of their 17 games under Mel.

Wigley was surprisingly handed the Saints job on a permanent basis two games into the 2004-05 campaign following the abrupt departure of Paul Sturrock.

A youth team coach at the time, Wigley’s only previous managerial experience of note had come with non-league Aldershot back in the mid-90s but he was welcomed in some quarters by fans wary of rumours linking Glenn Hoddle with a return.

His tenure lasted 14 games, including one memorable win over Portsmouth but little else besides.

The Italian won just three of his 16 games in charge of a Fulham side whose free-flowing style of football quickly deserted them upon promotion from the Championship.

However, the Tinkerman’s back-to-basics, rotation-heavy approach didn’t sit well with supporters either, many of whom could be heard chanting “you don’t know what you’re doing” during his final game in charge – a 2-0 defeat to fellow relegation strugglers Southampton that left Fulham 10 points off safety and all but doomed.

Adams was inexperienced in management, save for a mid-2000s spell with Wycombe, but the task of replacing the Spurs-bound Harry Redknapp at Pompey was made more difficult by the sales of Jermain Defoe and Lassana Diarra a few weeks into the season.

Though he came close to overseeing a memorable win over AC Milan in the UEFA Cup – the Rossoneri ultimately salvaged a 2-2 draw with two late goals – that was as good as it got during a tenure that featured just two wins in 16 league games.

Second-bottom with five points, Derby’s predicament was deepened further by a lack of transfer funds and rumours linking talented youngsters like Chris Riggott, Malcolm Christie and Seth Johnson with moves away.

Though Johnson soon departed for a forgettable stint with Leeds, Riggott and Christie remained but could do little to prevent Todd’s reign from unravelling over three miserable months that culminated in an FA Cup defeat to fourth-tier Bristol Rovers.

Terry Connor had the air of a dead man walking from the moment he replaced his former boss and pal, Mick McCarthy at Wolves.

Chief executive Jez Moxey had pledged to appoint someone experienced to replace McCarthy but went against his word and lived to regret it.

Wolves picked up four points from 13 miserable winless games under the increasingly glassy-eyed Connor, finishing bottom with a club-worst 25 points. Connor was demoted back to assistant that summer but left a few months later.

In a spot of bother under Javi Gracia - who'd let them to an FA Cup final only months previously - Watford turned back to Quique Sanchez Flores, who'd taken charge of their first campaign back in the Premier League.

Flores had previously led the Hornets to a midtable finish but his second spell at Vicarage Road was nothing short of disastrous.

Watford picked up just one win under the Spaniard, memorably getting humbled 8-0 by Manchester City and losing a key relegation six-pointer against Southampton before he was relieved of responsibilities.

Bradley beat the likes of Ryan Giggs to land the Swansea job yet his penchant for Americanisms – no one calls away fixtures “road games”, Bob – quickly drew ridicule from the fans and press. Worse still, he failed to solve Swansea’s defensive woes, picking up two clean sheets from 11 games in charge.

Described by chairman Huw Jenkins as a "long-term appointment" who would "stabilise matters on and off the pitch" Bradley was sacked after picking up just eight points from 33, shipping an alarming 29 goals along the way.

After enduring a miserable 85-day stint in charge of Inter Milan, De Boer must have assumed things couldn’t get any worse. But they could and they did.

Taking over from Sam Allardyce, the Dutchman was tasked with implementing a sexy new brand of football at Selhurst Park but flopped badly, with the Eagles losing their first four league fixtures of the season without scoring a single goal.

Sacked after 77 days – a whopping eight fewer than at Inter – De Boer’s Palace reign actually represents the shortest in terms of games.

A respected coach at Manchester United, Meulensteen had endured a fairly disastrous spell in charge of Brondby a few years prior to getting the Fulham gig where he once encouraged his players to “find their spirit animal” before one game, going around each, in turn, asking them about their chosen species.

In any case, he failed to get the Cottagers roaring again, winning just three of his 13 league games in charge. He was replaced soon after by Felix Magath. That didn’t’ work out too well either.

Reed’s six-week tenure saw the club dumped out of the League Cup by Wycombe, recording just one league win along the way. Painfully out of his depth, Reed’s increasingly withdrawn demeanour on the touchline earning him the nickname "Les Misérables" in the press.

The misery ended after just 41 days with Reid sacked on December 24. Christmas came early for Charlton fans that year but the gift waiting for them under the tree? Alan Pardew as his replacement.

NEW ISSUE Check out our new issue, a Euro '96 special