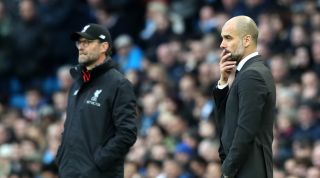 One of the more interesting sub-plots at the end of this season will unfold at Manchester City, where Pep Guardiola’s side have remained strangely short of momentum for the past few months.

It remains possible for City to win the Champions League and more than likely that they’ll end the year with at least a League Cup or FA Cup win, but their failure to match Liverpool in the Premier League has exposed a shortcoming which remains hard to define.

There are plenty of credible theories. There’s certainly some credence in suggesting that the prospect of league titles just doesn’t enliven these players in the same way. Or that the club's European ambition is diverting their organisational focus. Or even that Guardiola himself is no longer satiated by domestic success and that his slight disinterest is inadvertently informing a collective ennui.

Added to the side’s structural issues, that’s enough to create the perception of a critical flaw. It is only a perception, though, because theirs is a relative situation; City have been disappointingly inconsistent across 2019-20, but in most other years that wouldn’t have mattered nearly as much. The standard set by Liverpool means that it does matter, though, and, as such, City will have to spend their summer restoring their lost aura.

The first challenge will be technical. Clearly Guardiola has to make his team more secure and that will have to involve the signing of one centre-half, perhaps even two. With David Silva leaving the club and Sergio Aguero turning 32 in June, the other end of the formation will also require the kind of investment it hasn’t been nourished by for some time.

Beyond that, perhaps Guardiola even has tactical questions to answer? As a proposition, City aren’t as intimidating as Liverpool. They don’t play with the same energy and they don’t cut with the same precision. In direct opposition to Jurgen Klopp, too, he suddenly – ridiculously – seems like the lesser of the two minds.

He isn’t, of course, but he’ll still be aware of how few answers he’s perceived to have had in response to what Klopp has created. He’ll recognise also how inferior his City team have often looked against Liverpool and, as his generation’s Grand Master, will take that as a challenge to his ego.

So, brace for the reinvention. At his core, Guardiola is a theorist and a footballing intellectual. He’ll have something for Liverpool, we just don’t yet know what that will be. A new way of using his full-backs, perhaps, or some impossibly clever attacking strategy that the rest of the world has to spend the next few years trying to decode.

But there are also deeper questions, because it isn't just a sporting deficit. Before Guardiola can begin to install his new vision, the executive structure above him will need to re-prove its worth. Is City's recruitment really as good as it can be? Do their internal processes compare favourably with those at Anfield? It's difficult to say, but most indicators suggest not - not through comparing the performances of new signings or the profits made on player sales, certainly

Troublingly, Liverpool are also threatening to win the PR war off it and, to the City fans' chagrin, that advantage shows itself nearly every day.

It's in the tone journalists use in their articles and reporting. It's in the way rival fans view the club. There are some bigger issues involved in that, of course, but on a smaller level it reflects that Liverpool probably do a better job of selling themselves - it shows that they've been more adept at selling their story.

"This means more". It doesn't, of course, but it shows how susceptible much of the world is to a nice marketing line.

City are complicit in this, too. They've always been a less popular club, that’s the cost of their historic mediocrity, but they sometimes do themselves a disservice. Specifically, Guardiola, who is prone to bouts of obstinance and superiority in his press conferences and who, as a result, is a much harder character to grasp.

His criticism of the club’s fans over the weekend, for instance, for their sparse attendance of the FA Cup fourth-round tie with Fulham, was the kind of misstep that Klopp would never make. Not because there are significant differences between them as men, but rather that ‘Jurgen Klopp’ – the made-for-television character – plays to his audience much more effectively.

Guardiola may very well be the sharper mind, but Klopp’s routines are just much more compelling. So much so that when he does behave badly – which he seems to whenever Liverpool do anything other than win – nobody ever seems to notice. In fact, there isn’t an uglier spectacle in the whole of football than Klopp looming over an official and screaming in his face, but those episodes generally pass without comment.

Instead, he’s the one who inspires the saccharine articles and the misty-eyed match reports. Journalists walk from his house to Anfield, not from Guardiola's inner-city apartment to the Etihad Complex. It's a fundamental difference between what they're each able to provoke away from the pitch and - also - describes the different lenses through which their respective clubs are viewed as a result.

And that matters; it's a battle within the war. Both of which, unfortunately, City continue to lose.

While you're here, why not take advantage of our brilliant subscribers' offer? Get the game's greatest stories and best journalism direct to your door – for only £10.25 every three months – that’s just £3.15 per issue! Save money with a Direct Debit today. Cheers!

QUIZ Quiz! Can you name every FA Cup winning team ever?

COLUMN How do Manchester United get out of this slump? Lessons from their 1970s rebuilding