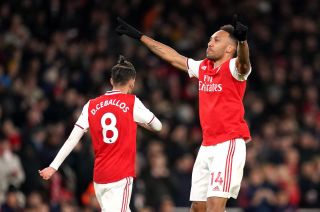 Aubameyang was reportedly subject to an approach from Barcelona in January but a move failed to materialise.

Arsenal coach Mikel Arteta has said the club will do all they can to keep their captain "under any circumstances".

The Gabonese striker is understood to be seen as a more affordable option if Barcelona were to fail in their pursuit for Lautaro Martinez.

Las Blaugranas are on the hunt for their new number nine following Luis Suarez's long-term injury.

According to Sport, Aubameyang wants to move to Barcelona and has relatives living in a coastal town near to the city already.

The report claims that some of the 30-year-old's family members have been residing in Spain for months already.

Aubameyang will have only a year left on his current Arsenal contract by the season's end.

The Gunners are reported to be fearful that if they can't agree on a new deal before the summer, they may be forced to sell their star man.

Another challenge posed, however, is that of the European football's suspension because of coronavirus - which is threatening contracts running down before the season is finished.

It was said that Aubameyang could wait to see if Arsenal managed to qualify for the Champions League before putting pen to paper.

But now it seems that that wait may be longer than anticipated and there is uncertainty whether the current campaign will be completed at all.

Aubameyang currently sits on 20 goals in all competitions this season, making him one of Europe's deadliest goalscorers.

Coronavirus: The biggest questions we have about the Premier League right now