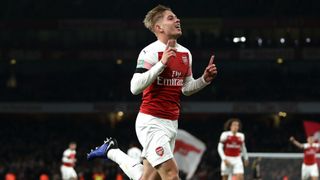 Highly rated Arsenal youngster Emile Smith Rowe is in Germany for a medical ahead of a proposed loan move to RB Leipzig, the Bundesliga club's coach Ralf Rangnick has confirmed.

The attacking midfielder has looked particularly promising in his four European outings, scoring on trips to Vorskla and Qarabag.

However, he has not made an appearance for Unai Emery's men in the Premier League, and Leipzig are close to bringing him to Germany.

Grateful for the year i’ve had i’ll be back stronger @Arsenalpic.twitter.com/5Xy36JrFGc— Emile Smith Rowe (@emilesmithrowe) January 2, 2019

Speaking at a news conference on Thursday, Rangnick said: "Yes, I can confirm that the player is in Leipzig. At the moment he is in for the medical checks.

"Then we'll have to see if we have everything available to complete the transfer today."