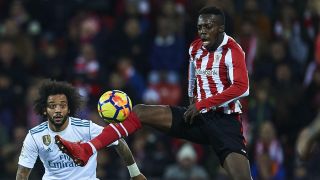 Inaki Williams has put pen to paper on a mammoth seven-and-a-half-year contract extension with Atheltic Bilbao.

The 23-year-old winger was previously linked with a switch to Liverpool but has committed his long-term future to the Basque club, where he is now tied until 2025.

Williams' new contract includes a release clause of €80million that will progressively rise until it reaches €108m, figures which exceed the fee required to take star centre-back Aymeric Laporte away from Athletic.

The news will come a boost to fans with goalkeeper Kepa, whose deal expires at the end of the season, heavily linked with a move to Real Madrid.

Williams has featured in all 19 of the club's LaLiga outings this season, contributing four goals and three assists.

He also scored twice as Athletic progressed to the knockout stages of the Europa League, where they will play Spartak Moscow in the last 32.

Athletic Club and have signed the renewal agreement by which the player will remain in the rojiblanca discipline until June 30, 2025.The cancellation clause will be 80 million euros, progressively increasing to 108 million. January 17, 2018