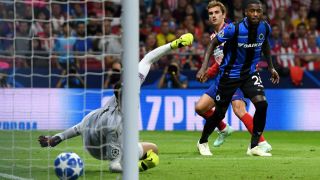 Antoine Griezmann scored in either half to help Atletico Madrid to a 3-1 Champions League win over Club Brugge at the Wanda Metropolitano on Wednesday.

After an opening win against Monaco two weeks ago, Griezmann's double – and Koke's late strike – has given Diego Simeone's side a perfect platform to progress from Group A.

The World Cup winner put his side ahead with a typically assured strike before Arnaut Groeneveld gave the Belgian champions an unlikely leveller with a stunning effort.

Griezmann then proved exactly why he is Atletico's talisman in the 67th minute, producing another clinical finish to set Los Rojiblancos on their way to three more points, which were sealed by Koke.

Atletico rarely threatened during a tepid opening, with Saul Niguez's wayward volley from close range their one clear sight of goal in the first 25 minutes.

Only a superb last-ditch tackle from Stefano Denswil prevented Thomas Lemar from finishing a flowing move before Griezmann broke the deadlock in the 28th minute, sliding coolly past Karlo Letica from eight yards after Lemar's cross had found him at the back post.

The visitors bounced back in style six minutes before the interval, though, Groeneveld unleashing a fierce effort from 25 yards that fizzed past Jan Oblak to pull them level.

Saul flashed a header narrowly over shortly after the restart, while Letica smothered Griezmann's effort just after the hour mark.

The Frenchman did net his second of the night soon after, stroking into Letica's bottom-left corner from Diego Costa's selfless pull-back.

Substitute Angel Correa blazed over with just Letica to beat late on and Atletico grabbed a third deep into stoppage time when Koke clipped home after Griezmann's surging run down the left.