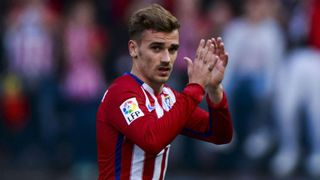 Antoine Griezmann has not signed a new deal with Atletico Madrid and is considering offers from other clubs, according to his football adviser Eric Olhats.

France forward Griezmann has enjoyed an outstanding season with Atletico, scoring 32 goals in all competitions, and will be key if they are to defeat arch rivals Real Madrid in Saturday's Champions League final at San Siro.

Griezmann is under contract until 2020 but has reportedly been the subject of interest from Chelsea, Manchester United and Paris Saint-Germain.

There have been claims Griezmann has penned a new contract at the Vicente Calderon, however, Olhats has rejected those rumours.

"Contrary to certain claims announcing that Antoine at Atletico next season will be the case without fail, nothing has been decided or endorsed," Olhats said in quotes reported by L'Equipe.

"We are currently listening to different clubs who also offer real interest and attraction."