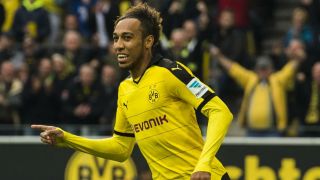 Borussia Dortmund forward Pierre-Emerick Aubameyang has won the CAF Player of the Year award - preventing Yaya Toure from scooping the gong for a record fifth time.

The 26-year-old Aubameyang has scored 27 times in as many club appearances this season.

Toure captained Ivory Coast to Africa Cup of Nations Glory in January and continues to be an influential performer for Manchester City, but the 32-year-old remains tied with Cameroon great Samuel Eto'o on four career wins after Aubameyang pipped him by 143 points to 136 in the final vote.

Herve Renard, now in charge of Ligue 1 side Lille, was named coach of the year after masterminding Ivory Coast's triumphant AFCON campaign.