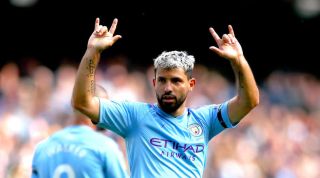 Disclaimer: This list only features centre-forwards, of those who at least play there regularly, so the likes of Lionel Messi, Mohamed Salah and Neymar weren’t considered. They have their own list...

Perennially underrated, Benzema may one day get the credit he deserves for a decade of consistent excellence at the Santiago Bernabeu. The former France international was perfectly happy to operate in Cristiano Ronaldo's shadow during the Portuguese's time at Madrid, and it was notable that Ronaldo always seemed more comfortable when playing alongside Benzema.

The former Lyon centre-forward has had to take on more responsibility since Ronaldo's departure, a challenge he hasn't shirked. The 31-year-old has scored 12 goals in 16 games at the start of 2019/20, while he remains as adept as ever at bringing team-mates into play.

Lukaku endured an underwhelming season at Manchester United last time out, scoring just 15 times in all competitions and losing his place at centre-forward to Marcus Rashford. It still represented a risk for the Red Devils to sell him to Inter, though, and the early evidence suggests Ole Gunnar Solskjaer and co. may have made a mistake.

Lukaku has done an admirable job of filling Mauro Icardi's shoes at San Siro, having netted 10 goals in his first 13 Serie A encounters. His touch remains erratic and his link-up play still needs work, but Lukaku's credentials as an effective marksman can't be questioned.

Having acquired Alexandre Lacazette a few months prior, a few eyebrows were raised when Arsenal went all out for the soon-to-be 29-year-old Aubameyang in January 2018. Yet the £56m they paid to Borussia Dortmund has proved to be an inspired piece of business, with Aubameyang one of the rare bright spots at the Emirates Stadium this term.

The Gabon international shared the Premier League Golden Boot with Sadio Mane and Mohamed Salah in 2018/19, scoring 22 times in the top flight and on nine more occasions in other competitions. Sharp and speedy, Aubameyang is a deadly finisher who's hard to get a handle on.

Icardi isn't what you would call shy and retiring off the pitch, as fans of Inter can attest. Controversy was never far away during the Argentinian's six years at San Siro, but there's no doubt he was worth the aggro, as demonstrated by his record of 124 goals in 219 appearances.

The 26-year-old has continued in a similar vein since joining PSG on loan in the summer, since when he's found the net 10 times in 11 outings. There's room for improvement in his work outside the box, but very few strikers come alive inside it quite like Icardi.

Firmino isn’t a striker in the mould of most players covered in this list, and would probably play a more withdrawn role under another manager, but he’s been used as the central attacker for the vast majority of Jurgen Klopp’s tenure at Anfield and therefore qualifies for selection.

Firmino’s goal record – 47 in his last 121 games for Liverpool since the start of last season – is good rather than great, but it’s his ability as a facilitator which really sets him apart. Intelligent, dynamic and technically gifted, the selfless Brazilian invariably brings out the best in those around him.

Suarez delivered one of the greatest individual campaigns in Premier League history when he almost led Liverpool to the title in 2013/14, and although he's not had as big a share of the limelight at a Lionel Messi-dominated Barcelona, the Uruguayan's tally of 186 goals in 261 matches for the Blaugrana is mightily impressive.

Technically gifted and surprisingly strong, Suarez is the archetypal South American striker. He can drop deep or sprint in behind, is extremely well-rounded, and on his day virtually impossible to play against. Those days aren't quite so frequent as they used to be, but rest assured: he's still got it.

​Leading his boyhood club to the Champions League final capped a remarkable few years for Kane, who has soared from Tottenham reserve to becoming one of the best strikers on the planet since 2014. The England captain has scored 159 times in his last five full seasons, won the Golden Boot at the 2018 World Cup, and has reached 20 Champions League goals faster than any other player.

Finishing is Kane’s standout attribute, but he’s also a brilliant passer who often drifts into deeper areas to pick up possession and bring team-mates into play. And although the 26-year-old isn’t the quickest, he’s an expert at finding half a yard of space in and around the penalty area. A true all-rounder.

Aguero’s days at Manchester City looked to be numbered early on in Pep Guardiola’s tenure, but the Argentina international has demonstrated his enduring quality to climb back above Gabriel Jesus in the centre-forward pecking order.

The 31-year-old's combination play and ability to press from the front have improved under Guardiola’s tutelage, and he has ultimately become more of an all-round – and better – striker for it. Sticking the ball in the back of the net remains his forte, though, and there are few players more clinical than City’s record goalscorer.

Lewandowski has been in preposterous form at the start of this season, plundering 27 goals in 20 games at the time of writing. The Pole turned 31 in August but somehow seems to getting even better, and is well on course to reach the 40-goal mark for a fifth consecutive campaign.

He's more than just a scorer too, adept at combining with team-mates and serving as a focal point for both club and country. With Lewandowski leading the line, Poland could be dark horses at next summer's European Championship.

Ronaldo is still deployed from the left on occasion, but in recent years he’s morphed from wide forward to central striker. The Portugal international doesn’t get as involved in the build-up play as he once did, but he remains incredibly productive in front of goal, having scored 34 times in his 57 appearances for Juventus.

The 34-year-old is also on course to set a new international goals record, with Ronaldo now just 10 behind Ali Daei’s 109 for Iran. Don’t bet against him doing that and winning the Champions League with a third club before next year’s out.

The 10 best forwards in the world

The 10 best centre-backs in the world