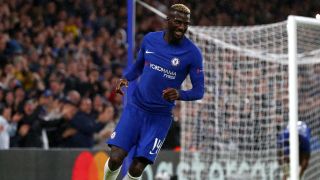 Chelsea midfielder Tiemoue Bakayoko says he is not in the team as a like-for-like replacement for Nemanja Matic.

Bakayoko's reported £40million move from Monaco prompted Matic to leave the Premier League champions for Manchester United and the promise of first-team football under Jose Mourinho.

The Serbia international has slotted seamlessly into the team at Old Trafford, while Bakayoko has yet to hit his stride in London as Chelsea struggle for consistency.

The 23-year-old has also been hampered by injuries and is a doubt for Saturday's clash with Watford at Stamford Bridge due to a muscle problem.

Bakayoko says he has already learned a lot from playing alongside N'Golo Kante, though, and insists his role under head coach Antonio Conte is not simply to replicate Matic's style.

He told Sky Sports: "My role is about linking up well with the player alongside me, whether it's N'Golo or Cesc [Fabregas]. We all know that N'Golo was named the best player in the Premier League, so I've been learning a lot from him.

"I'm not here to do what Matic did. Matic is a player that I really like; he's a very good footballer. I'm here to play my game, to try to implement what the coach asks, which means sticking tight to the opponents' playmaker, getting forward when I can and, above all, controlling the ball well and anticipating the play.

"I'm trying to show a mix of the two: part of what N'G [Kante] is about and the technique that Matic has. I've watched both players a lot and Chelsea are a club that I've always watched. I watched almost all of the club's games last season.

"I don't want to do what Matic did here just because I play in the same position as him. I'm trying to do what I know how to do and if the coach is happy with that, great. If he isn't, I'll keep working hard to become the player that he wants me to be."

Bakayoko also feels he can flourish under the guidance of Conte once he can overcome "little details" he wants to improve.

"Antonio Conte is one of the main reasons why I signed for the club," he said. "I knew that he was a coach who'd help me improve in terms of tactical awareness, and who has won many trophies. He has enjoyed success wherever he has been. In tactical terms, I think I've taken on what he expects from the team and his players.

"Now I need to improve on the ball and there are some little details that need to be smoothed out. I'm improving and in a few weeks' time, I hope to be have progressed further in all facets of the game."