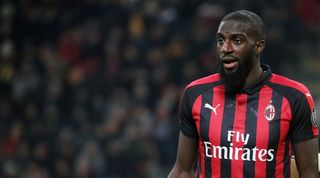 After a difficult start to life in Italy where the Frenchman struggled for form, he has grown to become one of the Rossoneri’s standout performers of the season so far.

The former Monaco man joined the San Siro club on a season-long loan in August last year, but the Italians have the option to make the move permanent for around £30 million next summer.

The club’s sporting director Leonardo suggested that Milan will only take up the option should they qualify for the Champions League, and the 24-year-old revealed he is hopeful that he won’t be returning to Stamford Bridge.

“I heard what Leonardo said,” Bakayoko told Corriere dello Sport. “But I’m not in a position to be talk about it. It’s a matter for Milan and Chelsea.

“Staying at Milan is my dream, the only thought in my mind, but I have a contract with Chelsea. I just want to finish the season in fourth place, then we’ll think about it.”

Milan coach Gennaro Gattuso was publicly critical of Bakayoko after some poor performances in the early weeks of the season, but the Frenchman insists he has built a strong relationship with the former Italy midfielder.

“After the words of Gattuso I didn’t feel good and wasn’t happy,” he said.

“I felt like I was under scrutiny in my position on the pitch. But I never spoke about it with the coach: I thought about working.

“I understand myself and know what my qualities are. I was convinced that by training hard, satisfaction would come. I never thought about having made a mistake by coming to Milan.

“In my brief career, not everything has gone well for me. Sometimes the start of an adventure at a new club was difficult. It happened both at Monaco and Chelsea and so I wasn’t surprised that history repeated itself at Milan. I need some time to adapt, but then…

“Gattuso loves his players and gives everything to make them train well. His talent is giving love to players.

“As a player he wasn’t my ideal role model. I say that with great respect because he won the Champions League, which is my dream, and please don’t tell him I said that!

“For me he’s the boss, a great person who has helped me a lot. In the first two or three months when it wasn’t going well, we spoke every day, but now there’s no need because we understand each other with a glance. Our relationship is perfect.

“I don’t know [if I’m a leader like Gattuso]. I try to give everything I’ve got for the team and the fans, to give 100%, because I have a big heart. It’s important when the coach believes you’re a leader.”