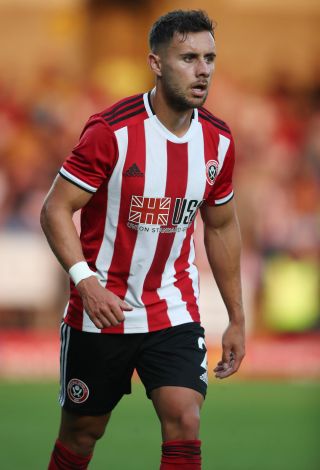 Sheffield United defender George Baldock believes the Blades are capable of competing against Arsenal after pushing Liverpool all the way in their previous home match.

The Blades resume their Premier League campaign in front of the television cameras on Monday night when the Gunners visit Bramall Lane.

In their last home game Chris Wilder’s side made life difficult for leaders Liverpool before eventually falling to a slender 1-0 defeat following a mistake by goalkeeper Dean Henderson.

Despite that loss, Baldock insists the Blades took confidence from their performance and hopes they can repeat the display against Arsenal.

“I think it was a really assured showing from us and we went toe-to-toe with arguably one of the best teams in the world at the minute,” said Baldock.

“You don’t achieve what Liverpool have achieved recently by luck and they are a top quality team and to go toe-to-toe with them gave us a lot of confidence and hopefully we can take that into Monday night.”

The visit of Arsenal will be the first Premier League match staged in the evening at Bramall Lane this season and Baldock believes the atmosphere under the lights in the stadium could work to the Blades’ advantage.

“I think night matches just have that something extra – under the lights at Bramall Lane with the light show before kick-off – and the fans seem to really get up for it,” he said.

“I love playing at Bramall Lane – the fans since I have been here are a different class. There’s such a connection with the manager and the captain and it feels like we all have one goal and one aim to achieve things together and it’s brilliant to play in that atmosphere.”

Ahead of the game, Blades boss Wilder is sweating on the fitness of John Fleck, Oli McBurnie and David McGoldrick.

McGoldrick has missed the last four matches with a groin problem while fellow striker McBurnie (knee) and midfielder Fleck both withdrew from the Scotland squad through injury.