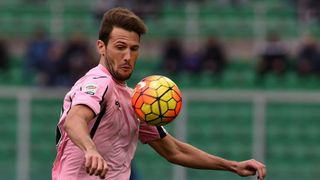 The attacking midfielder, who joined the Sicilian outfit in 2012, is widely regarded across Europe for his creativity and vision.

And Ballardini thinks the 26-year-old deserves a move to a bigger club.

"Vazquez? He is ready for a big team, with his quality [he] deserves a big European club like Liverpool or Manchester United," he told Mediaset Premium.

Ballardini was sacked just two months after being appointed head coach of Palermo, but defended his time in charge.

"In [Palermo] there was good management, we had some good matches and collected seven points in seven games," he said.

“The team is young and has room for growth, there are elements of quality with [Oscar] Hiljemark, [Edoardo] Goldaniga, [Robin] Quaison, [Ivaylo] Chochev and [Aleksandar] Trajkovski.

The coach had a publicised falling out with influential captain and goalkeeper Stefano Sorrentino one day before exiting the club in January, and maintains the general public are unaware of the politics involved while managing a football team.

Ballardini said: "Many do not understand the dynamics that are behind the football, I think the president should be president and the coach should be a coach. The players after the final whistle can pull the plug, not the coach."

Despite a run of 11 consecutive league victories, Ballardini believes Serie A champions Juventus are not performing to the best of their ability, instead tipping Napoli to claim their first Scudetto since 1990.

"Juventus are not playing well, they leans too much on individuals that are extraordinary like [Paolo] Dybala or Vazquez, but I do not like how they are playing football," the 52-year-old said.

"I appreciate instead Napoli, who are also in contention."