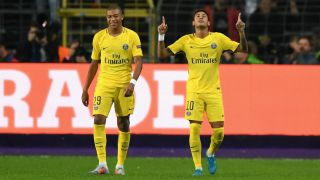 With Cristiano Ronaldo securing his fifth Ballon d'Or ahead of Lionel Messi on Thursday, the long-time rivals continued their dominance of the award.

Only once in the last 10 years - when Messi finished ahead of Barcelona team-mate Andres Iniesta - have the world's leading duet failed to finish in the top two spots in the voting.

Eventually, though, their dominance will have to come to an end. It may not be for a good few years yet, but there will come a time when someone not named Messi or Ronaldo will be posing with the prestigious trophy.

So who could step up to fill the sizeable void? Here are five leading candidates (listed in alphabetical order) to claim the honour at some stage in the future.

And yes, we're aware this high-class shortlist doesn't include Antoine Griezmann, Paul Pogba or Gabriel Jesus. There's no place for David de Gea either, showing the level of competition there is to replace the current top two.

It may seem unfair, but De Bruyne's bid for glory is hampered by his lack of goals. The dominance of the current top two has raised the bar in terms of attacking output - setting up chances for others helps, but scoring yourself for a successful side clinches the deal. At least the Belgian is at a club with lofty ambitions, as Manchester City look capable of becoming a European superpower with Pep Guardiola at the helm.

While Dybala is a key figure for Juventus right now, his Ballon d'Or hopes in the long run rely on the opportunity to replace Messi in the Argentina team. Still, at 24, there's no need for the forward to panic. Helping the Bianconeri reach the Champions League final last season helped raise Dybala's profile, while he started the current Serie A campaign with a blistering spell of 10 goals in six games. If he can maintain that hot streak over an extended period, voters will be forced to take notice.

Hazard has dazzled in the Premier League with Chelsea, helping his club secure the title twice while being named in the PFA Team of the Year in four of his five seasons in England. However, for all his brilliance in a blue shirt in recent years, the Belgian is yet to crack the top six in the Ballon voting in his career. Consistently linked with Real Madrid, the 26-year-old may feel a move to one of the big two in Spain might boost his chances of claiming the honour.

Viewed by many as the third best player in the world right now, Neymar is the obvious choice here. The Brazilian, who finished third in 2015 and fifth last year before returning to the top three in 2017, is no longer in the shadow of Messi at Barcelona, with his world-record transfer to Paris Saint-Germain allowing him to break out on his own. The forward's move outside of Spain should allow him to make a stronger case to win the trophy too, even if Ligue 1 is viewed as a step down from LaLiga.

A team-mate of Neymar's at PSG, teenager Mbappe burst onto the scene last season with his exploits for Monaco and has settled in quickly to life in the French capital. He admitted in October that he still has "a lot of steps to go" to be considered a serious contender for the Ballon d'Or, but the talented teenager has time on his side to outlast not just Messi and Ronaldo, but also the other names included on this list.