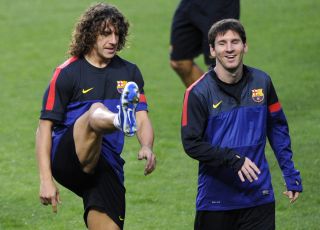 The duo have been named in the Barca squad for this weekend's game as Puyol edges closer to a comeback after seven months on the sidelines.

Spain international Puyol underwent surgery to repair a recurring knee problem earlier this year, his last appearance coming in March as the Catalan club beat Milan 4-0 in the second leg of their UEFA Champions League round of 16 tie last season.

Messi's absence has been markedly shorter, with the Argentinian seemingly poised to slot straight back into the starting XI after missing two games due to a thigh strain sustained in the 2-0 win at Almeria last month.

The availability of Puyol and Messi is a boost to the Spanish champions, who travel to San Siro to face Milan in the Champions League on Tuesday before welcoming arch-rivals Real Madrid to Camp Nou for the first Clasico of the season next weekend.

Midfielder Javier Mascherano could also be involved at the El Sadar Stadium after the former Liverpool man recovered from a hamstring injury that has kept him out for four weeks.

Forward Isaac Cuenca is ready to play following a four-month lay-off with a knee injury, but defender Jordi Alba and winger Ibrahim Afellay are still unavailable.