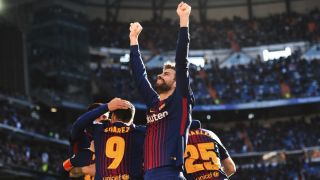 Barcelona were stung last year when Real Madrid took back the Liga crown and became the first team to win back-to-back Champions Leagues in the modern era.

Well, order has been restored from a Camp Nou perspective in 2017-18. Barca have regained La Liga, the 25th league championship success in their history, and they have done so without losing a match.

Although the campaign is not yet at an end, their 'invincible' run is still a remarkable achievement. Arsenal managed it in the Premier League in 2003-04, but you have to go back to the great Athletic Bilbao side of 1929-30 for the last time the feat was accomplished in Spain's top flight.

With Madrid imploding domestically, it has rather felt like a procession for Ernesto Valverde's side, but there have nonetheless been some critical matches behind their latest triumph. Here, we pick out the top five.

Barca began the league season with 2-0 wins over Real Betis and Deportivo Alaves, but confidence was still low in the wake of the 5-1 Supercopa de Espana thrashing by Madrid and the pang of losing Neymar to Paris Saint-Germain.

The first Catalan derby of the campaign was the perfect tonic, and it showed just how ruthless Barca could be in Valverde's new 4-4-2 set-up.

Lionel Messi bagged a hat-trick, with two of those goals set up by Jordi Alba in an ominous sign of what was to come this season, before Gerard Pique and Luis Suarez capped the resounding win late on.

The win over Espanyol was followed by a 3-0 Champions League victory over Juventus, showing Barca fans that their season was certainly not to be written off.

They found themselves in trouble four days later, though, with Gaku Shibasaki's spectacular strike keeping Getafe 1-0 up with an hour gone at the Coliseum Alfonso Perez.

Barca dug deep to salvage a win from an unconvincing display, though. Denis Suarez levelled 62 minutes in, before substitute Paulinho bagged his first for the club with six minutes remaining.

The 'Christmas Clasico' was a gift to Barca in the title race.

Their unbeaten run looked to be under threat during a strong first-half showing from the hosts, but the visitors seized control at the Santiago Bernabeu after the break to strike a major blow to the defending champions.

Luis Suarez opened the scoring 54 minutes in and, when Dani Carvajal was sent off for handball and Lionel Messi made it 2-0 from the penalty spot, the points were safe. There was still time for Barca to rub salt into the wounds, though, with Messi setting up Aleix Vidal for a late third despite losing one of his boots in the build-up.

17 - Lionel Messi has scored more goals against Real Madrid than any other player in La Liga history. Nemesis. December 23, 2017

Barca have a rotten record in San Sebastian and it looked like they would finally taste defeat when Willian Jose and Juanmi put Real Sociedad 2-0 up inside 34 minutes.

Paulinho – so often a surprising hero for the Catalans this term – halved the deficit before the break, though, before Lionel Messi and Luis Suarez turned the screw.

Suarez struck twice to set Barca on course for the win and Messi's free-kick made the result safe five minutes from time, as the visitors moved 19 points ahead of Real Madrid and nine clear of second-placed Atletico Madrid.

Three draws in five games, including a 1-1 result away to lowly Las Palmas, had suddenly given Atletico Madrid hope of a title shot ahead of this showdown at Camp Nou.

They had been eight minutes from beating Barca in the reverse fixture in October and, with nine goals scored in their last two games, Diego Simeone's men fancied their chances.

It was not to be. Barca's stifling pressing and possession play kept Atleti's chances at a bare minimum, Messi sealing the victory with a sumptuous first-half free-kick – his 600th career goal – to put his side eight points clear at the top with 11 matches left.