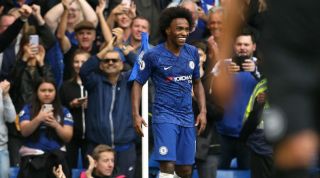 Willian's current deal expires in June and it's understood that he's very unlikely to renew his contract, as he looks for a change of scenery.

According to Marca, Barcelona have taken advantage of the stall in negotiations and are close to wrapping up a pre-contract agreement with the Brazilian.

Willian has been at Chelsea since 2013, when he joined from Russian outfit Anzhi Makhachkala - notoriously snubbing Tottenham Hotspur at the last minute.

The 31-year-old has scored 32 goals in 221 games for Chelsea and has won two Premier League titles during his time at the club.

Frank Lampard has utilised Willian as an experienced head amongst a squad lined with young players.

The wide man may prove pivotal in the second half of the season following Chelsea's failure to make any new additions in the January window.

Barcelona have been keen on Willian for a few years and reportedly made multiple bids for the Blues man in 2018.

The bids culminated in an offer that was believed to worth about £55m, which Chelsea rejected.

La Blaugrana ended up signing Willian's fellow countryman Malcolm from Bordeaux instead, who has since moved to Zenit St. Petersburg.

The Catalan giants were understood to be on the hunt for a forward in last month as a result of an injury to Luis Suarez.

Suarez,33, is thought to be out of action until the end of the season - Antoine Griezmann has been struggling to fill the gap thus far.

Willian may provide Barcelona with a cost-free reinforcement whilst they look to spend big on a new centre-forward in the summer.