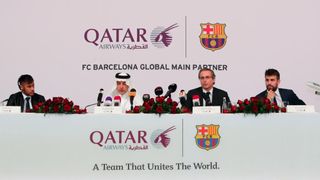 Barcelona have extended their sponsorship deal with Qatar Airways with one additional year until June 2017.

The previous contract between both parties expired at the end of the 2015-16 campaign and Barcelona were reportedly keen to find a more lucrative main sponsor.

However, Qatar Airways now stay on Barcelona's jersey for an extra season under the same terms of their old deal, which is reportedly worth €35 million per season.

"The success that has accompanied the club has partly been their work.

"It is a pleasure to be able to work together for another season and we hope to continue along the same lines of mutual growth."

Barcelona had no shirt sponsor at all until teaming up with Unicef in 2006, with the non-governmental organisation's name adorning their kit until 2011.