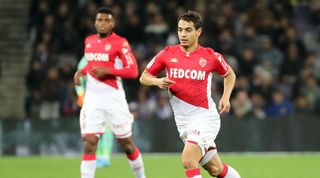 Luis Suarez suffered a knee injury earlier this month and he isn't expected to return until May at the earliest.

The Uruguayan's absence has forced Barcelona into searching for a new striker to try and make up the goal tally Suarez would normally contribute.

There was initially the idea of Antoine Griezmann occupying the number nine role in the side, but a more natural centre-forward may be required.

La Blaugrana have previously been linked to the likes of Pierre-Emerick Aubameyang at Arsenal and Lautaro Martinez at Inter Milan.

However, it appears the Catalan club will instead turn to Ligue 1 to hire a new striker.

According to Foot Mercato, in the past couple of days, Barcelona have contacted Monaco over the possible signing of their main goalscorer Wissam Ben Yedder.

The French striker is in the form of his life, having scored 14 goals in 18 league games so far this season.

It's understood that Barcelona officials have met with Ben Yedder's agent and have launched a staggering €80m bid for the player.

But despite the sizeable offer, Monaco are believed to be extremely reluctant to let go of their star man and have rebuffed the approach.

The state of play remains in the balance as it's yet to be seen if Barcelona will return with another offer before the end of the month and whether Ben Yedder himself pushes for a move.

It's reported that the La Liga giants may turn their attentions closer to home - specifically Rodrigo of Valencia.