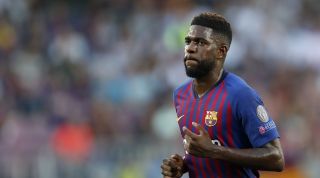 Umtiti has struggled with injuries over the past couple of seasons and has found himself dropping out of contention for a place in Barcelona's starting squad.

Arsenal, who are believed to be long-term admirers of the French defender, sniffed an opportunity to lure Umtiti to the Emirates Stadium.

The Gunners were known to be on the hunt for a centre-back in January following injuries to Calum Chambers and Shkodran Mustafi.

The leaky Arsenal defence has been a cause for concern for a long time and Mikel Arteta was hoping the club would provide him with reinforcements.

Umtiti was a player Arsenal were heavily linked with last summer but the north London side spent a sizeable chunk of their budget on William Saliba instead.

However, Saliba would stay in France with Saint-Etienne as part of the deal - meaning he won't feature until next season.

According to Le Parisien (via SPORT), Barcelona were open to selling Umtiti last month, but the defender chose to stay amid interest from Arsenal.

Barcelona and Umtiti are believed to be planning to reassess the situation in the summer.

Meanwhile, Arsenal were forced to look elsewhere for their central defensive signing and found their man in Flamengo's Pablo Mari.

The Spaniard joined Arsenal on loan with an option to buy in the summer believed to be worth around £11m.

Mari was at Manchester City for three years but never featured for Pep Guardiola's side - instead spending his time out on loan.