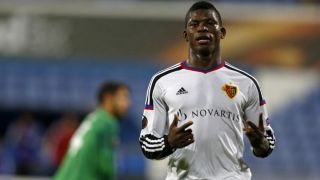 Basel have rejected a bid from Wolfsburg for rising forward star Breel Embolo, the club's president has confirmed.

The 18-year-old has reportedly attracted the interest of a host of European giants following his performances for the Swiss champions over the past 18 months.

Premier League sides including Manchester United and Tottenham have been linked with the striker, while Wolfsburg sporting director Klaus Allofs admitted earlier this month that negotiations for Embolo were underway.

However, Basel chief Bernhard Heusler - who has already sanctioned the sale of Mohamed Elneny to Arsenal in the January transfer window - says an offer from the Bundesliga side has been flatly rejected, meaning Embolo is likely to see out the season at St Jakob Park.

"After considering all the arguments, we decided to grant VFL a rejection without negotiating the economic conditions of the offer," he told Sport Bild of a transfer bid reported in Germany to be worth close to €27million.

"Of course, the deemed VFL's offer very interesting for him, but has accepted the decision of the clubs in a professional and fair manner."

Embolo, who is battling for a spot in Vladimir Petkovic's plans for Euro 2016, has scored eight goals in all competitions this season.