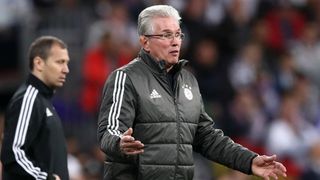 Jupp Heynckes insisted he will not coach elsewhere next season as the Bayern Munich boss prepares to farewell the German champions.

Heynckes will be replaced by Eintracht Frankfurt head coach Niko Kovac in 2018-19, having returned to the Bundesliga giants in October following Carlo Ancelotti's sacking.

The 72-year-old, who guided Bayern to the treble in his third spell at the club in 2013, has enjoyed more success this time around – leading the Bavarians to a sixth successive Bundesliga crown.

Heynckes also oversaw Bayern's run to the Champions League semi-finals, which ended against Real Madrid on Tuesday, but the German veteran reiterated his retirement plans.

"I will not go back to a bench and that's fine," Heynckes said following Bayern's enthralling 2-2 second-leg draw at the Santiago Bernabeu.

"There are not many people who get into these adventures at 72. I don't have any emotion about it."

Thank you for your incredible support this evening, fansMay 1, 2018

Bayern's European dream came to a halt against two-time reigning champions Madrid, who prevailed 4-3 on aggregate in the Spanish capital.

However, a Karim Benzema brace – including a huge error from goalkeeper Sven Ulreich less than a minute into the second half – killed off Bayern's hopes of a comeback, with James Rodriguez's leveller merely a consolation.

"If you see both games we were the better team. But unfortunately, we couldn't make the final. That is very disappointing for me and my players. Looking at today's game it was from both teams an advertisement for the game of football," Heynckes said.

"It was a great game, which we dictated. And Real can say thanks to [goalkeeper Keylor] Navas who had a great performance and at the end of the game denied us when we had very good chances."

"We shook ourselves and fought back and played well. You could see that Real were only playing counter-attacks in their own stadium," Heynckes continued. "I have to give my team a huge compliment. As I just told them: I haven't seen Bayern Munich this strong for a long time."

Bayern midfielder Corentin Tolisso lamented the loss, telling beIN SPORTS France: "This is clearly the biggest disappointment of my career. I had already lost in the Europa League last season, and there in the Champions League. It is a degree above. It's very hard."