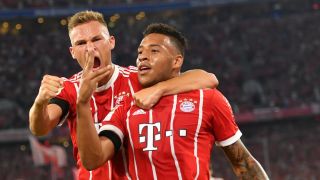 Niklas Sule and Corentin Tolisso were on target on their Bundesliga debuts for Bayern Munich as the champions' title defence started with a 3-1 win at home to Bayer Leverkusen.

After a poor set of pre-season results, questions had been asked about whether Bayern were ready for the new league season, but they dispelled any such worries with a comfortable display on Friday at a wet Allianz Arena.

Despite being without injured first-team quintet Manuel Neuer, Javi Martinez, James Rodriguez, Thiago and Jerome Boateng, Bayern easily extended their run of home league wins against Leverkusen to five in a row by racing into a 2-0 lead.

A pair of league debutants combined for the opening goal after just nine minutes when Sule headed a left-wing free-kick from former Hoffenheim team-mate Sebastian Rudy across goal and out of Bernd Leno's grasp.

Another set-piece provided the second goal nine minutes later, as Arturo Vidal recycled a corner for Tolisso to head home at the back post, and Bayern's third came shortly after the restart thanks a Robert Lewandowski penalty given for Charles Aranguiz's shirt-pull, via the Bundesliga's new video assistant referee (VAR) system.

Admir Mehmedi replied with a fine consolation goal, but victory was Bayern's 232nd win in their 300th home game at the Allianz Arena.

Historic moment as the new is called upon for the first time to award 's penalty. August 18, 2017

Tolisso stung the palms of Leno four minutes into his league bow for Bayern as the champions made a dominant start.

And the opening goal had been coming when Sule powered in a towering header from Rudy's deep free-kick after Dominik Kohr had brought down Franck Ribery in full flow.

Leverkusen responded strongly, however, and Sven Ulreich had to thrust out his right leg to block a low strike from Karim Bellarabi.

But they were soon undone by another set-piece as Joshua Kimmich's right-wing corner was punched by Leno to Vidal, who showed good awareness to pick out Tolisso with a cute volleyed pass for the debutant to nod in from close range.

Tolisso almost had another as Bayern broke at speed after 22 minutes, but his slotted effort bounced back off the post before swirling winds and heavy rain made conditions tricky.

A little delay to the start of the second half as the referee waits for the rain to ease off. Probably a good call. August 18, 2017

The stormy weather delayed the restart and Leverkusen's new coach Heiko Herrlich introduced Julian Brandt and Aleksandar Dragovic at half-time to try and turn his side's fortunes around.

But Bayern stretched their advantage again after 52 minutes when a VAR review awarded a penalty for a needless foul by Aranguiz on Lewandowski, who stroked the penalty home himself.

Kimmich blocked Kohr's shot on the line, but Leverkusen deservedly got on the scoresheet when Brandt teed up Mehmedi to rifle a thumping strike into the roof of the net from the left side of the box.

Kohr should have converted Mehmedi's free-kick after 72 minutes, but he headed wide from 10 yards as Leverkusen threatened to take advantage of Bayern's sloppy second-half play.

Substitute Kingsley Coman and Lewandowski both went close to adding gloss to the scoreline, but Bayern's season is up and running with a straightforward home win.