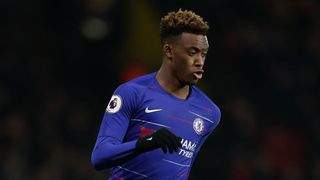 Maurizio Sarri does not think joining Bayern Munich would be a good move for transfer-linked Callum Hudson-Odoi, convinced he is best served by staying at Chelsea.

The 18-year-old winger is highly rated in English football, having played a key role in England's Under-17 World Cup triumph in 2017.

He has become a part of Chelsea's first-team squad over the last year, but has still only featured three times in the Premier League, and reports suggest he is refusing to discuss a new contract until he is given assurances over playing time.

As such, Bayern are said to have been alerted to his situation and have reportedly made several offers for the talented teenager, determined to not miss out on another promising English prospect after seeing Borussia Dortmund sign Jadon Sancho from Manchester City.

Sarri is adamant Chelsea represent a better option for Hudson-Odoi, however, predicting a bright future for him at Stamford Bridge if he stays.

When asked whether he thinks joining Bayern would be a good move for Hudson-Odoi, Sarri told reproters: "I don't think so, because he's an English player, he's very young.

"He has the future and I think he has a very great future here, with the national team and with Chelsea. I think to stay here is better for him.

"I know, for me, he is a very important player. He's young, but he's improving. He played really well in the last match.

"He was in trouble against Watford, but only because of a hamstring problem. He is improving, I'm very happy with him. I don't know the situation with the club, but I'm happy with the player."

Despite making his opinion clear in public, Sarri has not tried to impose his thoughts on Hudson-Odoi himself, because he feels it is not his business.

"No, because I'm not in charge of these things [transfers]," he said. "I don't want to talk to a player about things that have nothing to do with me.

Another Chelsea player linked with a departure is Gary Cahill, as the experienced centre-back has only played once all season in the Premier League.

Sarri remains unsure about his future, but does feel as though the 33-year-old's focus is not on his football.

"We don't need a replacement [if Cahill leaves], because we have [Ethan] Ampadu."