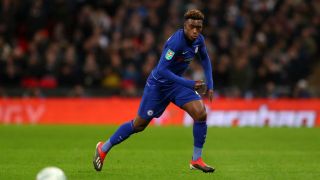 Maurizio Sarri believes Bayern Munich have not acted in a professional manner during their open pursuit of Chelsea winger Callum Hudson-Odoi.

The 18-year-old attacker has attracted interest from the German champions this month, with Bayern said to have been alerted to the situation by his apparent unwillingness to sign a new contract.

Bayern are reported to have tabled three bids for the prospect, who is apparently eager to leave the club in search of greater first-team exposure having appeared just once in the Premier League this term.

And Sarri believes Bayern have crossed a line with Salihamidzic's public declaration of interest.

"I think it's not professional, because they are talking about a player under contract at Chelsea, so they didn't respect our club, I think," Sarri told reporters.

"Then I don't know what more to say, I don't know the situation [with any potential transfer]. I am very happy with the player, because he's improving a lot, I think, in the defensive phase.

"Now he must improve in movements without the ball, but he's working very well at the moment. I'm very happy with the player and I'd like to have him in the future."

Transfer speculation has swirled around Chelsea in the last couple of weeks, with Hudson-Odoi, Cesc Fabregas, Alvaro Morata and Willian all linked with moves away from the club, while Gonzalo Higuain, Nicolo Barella, Leandro Paredes, Andre Silva and others have been suggested as potential targets.

While some fans might enjoy the excitement posed by such uncertainty and speculation, Sarri is finding it all rather frustrating, baffled by a month-long transfer window in the middle of the season.

"It's crazy to have a market of 30 days in this moment of the season, because we play every three days, so we need rest," Sarri added.

"It's crazy. I think the January market window would be better for one week or 10 days, no more."