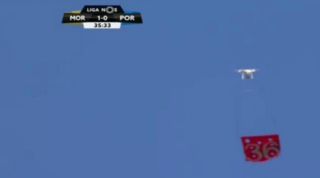 Benfica wrapped up their fourth Portuguese league title in a row last weekend after thrashing Vitoria Guimaraes 5-0, ruling out the possibility of rivals Porto catching up.

So, in the 35th minute of Porto's dead rubber at Moreirense, with the Dragons already guaranteed second place, a drone flew over the stadium holding a red flag with the number 36 on it (the number of times Benfica have now won the league, as you probably guessed).

The drone circled the stadium for a number of minutes, and unsurprisingly provoked a furious reaction from some sections of the Porto away support that also reportedly sung a distasteful Chapecoense chant.

The real shame for Benfica fans was that the flight would have been even more effective had it been just a single minute later: Porto conceded another goal in a 3-1 defeat, their first league loss since August.