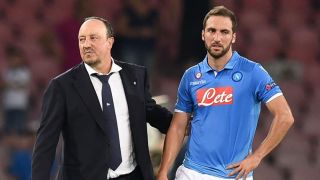 The Brazilian – top scorer at the 2012 Olympic Games with six goals in five appearances en route to a silver medal - was the Spaniard's preference to replace the departed Edinson Cavani in 2013.

However, the Napoli president was uncertain following a meeting with Damiao's agent and instead took the initiative to sign Higuain - who has scored eight goals in 10 Serie A appearances this term - from Real Madrid himself.

"It was our intuition to bring him to Napoli," De Laurenttis told Radio 24.

"Benitez wanted to take Leandro Damiao, but after meeting with the Brazilian's agent we had doubts.

"So I flew to Madrid to find out if it would be possible to get Pipita [Higuain]. Then I met his father and we got the deal done.

"Now he's happy at Napoli and you can see that from the fact he's still here despite the many offers we've received."

De Laurentiis went on to suggest that he prefers the more personable approach of Benitez's replacement Maurizio Sarri.

"Maurizio Sarri is more of a coach than Benitez, in terms of training rather than theory," he added.

"The Spaniard is a theorist and tries not to disturb the atmosphere in the dressing room.

"The former Empoli man, however, is known to have a direct relationship with the players."