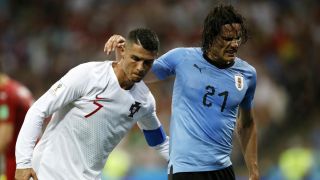 Cavani was helped from the pitch by Cristiano Ronaldo during his side's 2-1 last-16 win over Portugal on Saturday, having hurt his hamstring not long after scoring his second goal of the game.

Further tests are expected to be carried out at the team's base in Nizhny Novgorod, as some worrying pictures emerged on Monday apparently showing the striker struggling to walk down stairs from his hotel room.

Bentancur is not sure how serious the injury will prove to be, but he says Cavani was positive enough during a recovery training session with the team.

"He's very well," the Juventus midfielder told a news conference. "He's happy to have gone through and with his level from the other day and the performance of the team.

Uruguay will face France in Nizhny on Friday, after Didier Deschamps' side overcame Argentina in the last 16 with a thrilling 4-3 win, in which Kylian Mbappe played a starring role.

Bentancur accepts they will be met with a daunting task but he has faith in his side's collective defensive strength.

"France are looking good," he said. "They've shown throughout the World Cup how good their game is, their speed, how compact they are, it's unbelievable.

"But we'll face them as we've been doing until now. It's a tough match, like the ones we've been having, and we'll do our job, trying to be compact, defending all together.

"If each one of us manages to do what we know we can, then we can achieve this. We'll see."