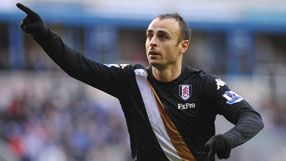 The Bulgarian striker, who left Old Trafford in August after four years where he struggled to hold down a regular starting spot despite the odd moment of brilliance and 48 league goals, faces his old team on Saturday in the FA Cup Fourth Round.

When he left United, Berbatov criticised Ferguson for the way he had been treated towards the end of his time at the club and said he had lost respect for his former manager and that he had not even said goodbye to the Scot.

When he takes to the Old Trafford turf again this weekend, he may feel he has a point to prove and Ferguson is well aware of the threat the creative Bulgarian poses.

"He is their best player," Ferguson told a news conference on Friday.

"I don't think he was a failure here. He was a really good player. At his age it's not easy to be not playing when I have lots of choices. He wanted first-team football... and it was the right thing to do. I think he's doing well there.

"It's a step down from Manchester United to any club in my mind. But it's not a huge drop. The problem for him here was the way we wanted to play and the selections I had. I had Carlos Tevez here also and that affected both of them."

Fulham manager Martin Jol is hoping for a big performance from Berbatov, who has scored seven league goals this season, telling British media this week he would "love to see him score a hat-trick over there".

United go into the game on the back of some warm-weather training in Qatar, having avoided the snow in Manchester.

"We couldn't have picked a better moment [to go away] and hopefully we will get the benefit of that," Ferguson said.

The Premier League leaders are still without Jonny Evans and Ashley Young but Ferguson was hopeful he would have a fully fit squad in time for United's Champions League last-16 first leg at Real Madrid on February 13.

In the mean time, Ferguson is concentrating on domestic matters and is keen to enjoy better FA Cup success than in recent years which have included a fourth-round exit last season at the hands of arch rivals Liverpool.

United have won the FA Cup a record 11 times but have not lifted it since 2004.

"We haven't done as well in the FA Cup for a few years now," Ferguson said.

"It's a cup which has fantastic appeal given our record in it. We have benefit of the home draw. We'll take that any time. It's going to be a challenge for us but we would play anyone at the moment."