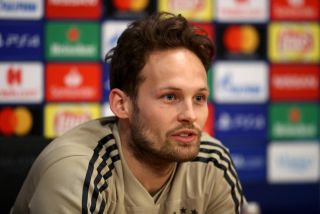 Ajax defender Daley Blind says his side’s cup final win celebrations at the weekend were “timid” owing to the gravity of their looming Champions League clash with Tottenham.

The Dutch side won the KNVB Cup with a 4-0 success over Willem II on Sunday but their thoughts immediately turned to the semi-final second leg with Spurs.

Ajax are protecting a 1-0 lead from last week’s first leg in London and are 90 minutes away from a first Champions League final since 1995.

Their silverware on Sunday could be the first part of a treble as they are also in the box seat to claim the Eredivisie title, needing to match PSV’s results over the last two games to lift the trophy.

But Blind, who scored the opening goal for Ajax in the final, said the party was a low-key affair.

“Most were on the pitch and afterwards we celebrated in the stadium with the fans,” the former Manchester United defender said.

“After that it was timid, we had food with the players and after that, we went home.

“It wasn’t difficult, right in the moment it’s not. You know what’s coming.”

Blind added: “It’s clear this match was in our thoughts.

“I’m not nervous. I think a little bit of healthy tension is good and comparable to the other matches.

“Just like the other matches, and the group phase, they’re all important matches against big opponents and you have to make the best of it during preparation. You have to do that yourself.”

Ajax earned their lead at the halfway point of the tie thanks to Donny van de Beek’s first-half goal at the Tottenham Hotspur Stadium last week.

The Dutch side cut through Spurs’ back three at will in the opening 30 minutes before a change in shape from the hosts changed the game.

Ajax struggled to cope with Spurs’ physical and direct approach, giving an insight into how Mauricio Pochettino may approach the game in Amsterdam.

Coach Erik ten Hag admitted they did not play as well in that second period in London but was pleased with how his side defended.

“Differently or better, during the last hour we did things right,” he said.

“The organisation was excellent in defence. We had to do things differently, the last phase we didn’t play that well.

“We thought, ‘We are one ahead, we’ll defend that’ and in the end, we had to do something different.

“That was our game. It depends on the opponent, we’ll have to transcend our boundaries. We’ll see what’s required tomorrow.”

After scoring just one away goal, Ajax could be vulnerable to a Spurs side who will have Son Heung-min available again.

“We will play to our own strengths with respect to the opponent. We will have to win. It’s a new game.”

David Neres, who hit the post at the Tottenham Hotspur Stadium last week, is a doubt with an injury picked up in the final, although he did train on Tuesday afternoon.