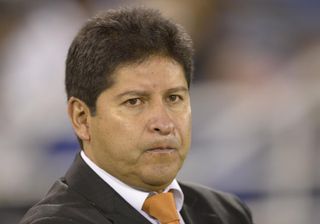 Eduardo Villegas' The Strongest left it late to win 1-0 at Bolivar, and that was enough to draw level on points with San Jose, who lost 2-1 at Aurora.

In Saturday's only game, Jair Reinoso's cheeky flick from inside the area was enough for The Strongest.

San Jose looked set to maintain their three-point lead at the top when Marcelo Gomes gave them a 31st-minute lead at Aurora.

But second-half goals from Roberto Gamarra and Eduardo Vallecillo saw eighth-placed Aurora to the upset win.

Club Universitario also closed in on top spot after Federico Silvestre's goal on the half-hour mark saw them past Nacional Potosi 1-0.

Real Potosi ended a three-game losing run as they held on for a 1-0 win at Guabira after Nicolas Bubas put them ahead on nine minutes.

A stunning first half helped Sport Boys to a resounding 4-1 victory at home to Blooming.

Daniel Manjon and Anderson Gonzaga struck in the opening 10 minutes before Leandro Ferreira added a brace to make it 4-0 at the break.

Sergio Almiron netted a consolation goal on the hour-mark for the visitors, scoring from the penalty spot.

Oriente Petrolero and Wilstermann played out a 0-0 draw.