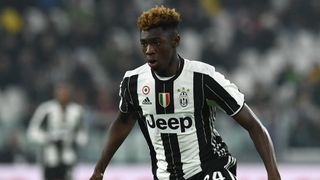 Moise Kean's first Juventus goal in the dying seconds of the club's Serie A season ensured the champions concluded their victorious league campaign with a 2-1 win at Bologna.

The Bianconeri secured a sixth successive title with a 3-0 victory over Crotone last Sunday, having won the Coppa Italia against Lazio four days earlier, with Massimiliano Allegri's men determined to complete an historic treble against Real Madrid in next weekend's Champions League final.

But Bologna threatened to interrupt their preparation for that showpiece clash, scoring with their first shot on target through Saphir Taider and then defending bravely as Juve looked to hit back.

Paulo Dybala finally found a way past the brilliant Angelo Da Costa, though, and the visitors stole victory in the 94th minute.

Mario Mandzukic won a free-kick and seemed to injure himself in the process - leaving Allegri sweating on his fitness ahead of facing Madrid - and Kean met Miralem Pjanic's delivery with a firm header.

Allegri made six changes to his side but opted against resting Dybala and Gonzalo Higuain, the visiting coach surely wincing as Bologna flew into a number of rugged challenges early on.

Juve soon found some fluency and, following a half-chance for Mattia Destro at the other end, Dybala failed to get the necessary purchase on a close-range finish and Stefano Sturaro strayed offside as he netted.

Higuain then tested Da Costa for the first time with a low drive on the turn, before a fine last-ditch Emil Krafth challenge denied Sturaro a clear shot at goal from Sami Khedira's incisive pass.

Another Higuain blast missed past the left-hand upright shortly before half-time and the forward lofted a cute pass through for Khedira after the restart, the Germany international prodding wide of the other post.

Stand-in Juve keeper Emil Audero had been untroubled but, after 52 minutes, he was beaten in spectacular fashion as Taider, taking possession wide on the left, cut inside to arc a glorious strike into the top-right corner.

Juve renewed their attacking intent as Dybala volleyed wide and then summoned Pjanic and Mandzukic from the bench in the hope of rescuing the points.

Da Costa twice kept out Higuain, though, charging from his line to make a fine tackle 25 yards from goal before holding the former Napoli man's tame header, and saved magnificently from Dybala's curler.

But Juve kept the pressure on and, after Da Costa instinctively blocked Higuain's shot, a rebound fell Dybala's way for a simple finish.

Although both sides went looking for a winner, it did not look likely to arrive until Mandzukic won a set-piece for Pjanic to brilliantly plant on Kean's head at the death, the teenager becoming the first player born in the 21st century to score in Serie A.