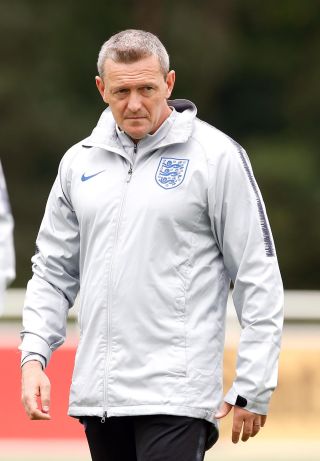 Aidy Boothroyd is out to prove English coaches can challenge the world’s best.

The England Under-21 manager has dismissed any notion foreign coaches are better than their homegrown counterparts.

He is preparing for Euro 2019 in Italy and San Marino with the Young Lions facing France on Tuesday.

And the 48-year-old is eager to show the talent of the English coaching pool.

“I hope we play in a way that excites and entertain people and changes the perception of English coaches,” he said.

“For too long there has been this widely-held belief that foreign coaches are better than our ones simply because they come from abroad, and they are not.

“The quality of a coach should not be decided by nationality, it is about whether they can do the job or not.

“It’s the same with our players too. For years they have been denied opportunities by an influx from overseas and told they are not as good as them.

“But as we are seeing now that is not the case either. So I am hoping we go out and showcase the best of English young talent so that people can see just how good our coaching system is.”

Boothroyd has left nothing to chance with England also facing Romania and Croatia in Group C.

The dressing room at AC Sammaurese, a Serie D side where the Young Lions are training, has been personalised with inspirational quotes on the walls.

“I’m not a good painter and decorator so I wasn’t the one who came up with that good idea,” Boothroyd said.

“It shows we have not only got a lot of good players but a lot of clever people at the FA because it is a genius thing to do in terms of psychology, motivation and making the players feel at home.

“It is actually one of mine on there which says: ‘There has never been a better time to be an England player’.

“With the pathway set out by the FA and thanks to Gareth (Southgate) there is now a pathway into the senior team for our young footballers if they play regularly and do well.

“That hasn’t always been the case in previous years but it is now, and we are reaping the rewards from the that at all age levels.”