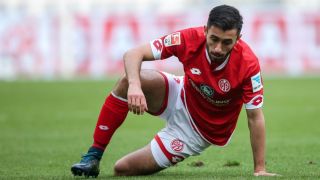 Mainz have decided to pull the plug on Yunus Malli's proposed transfer to Borussia Dortmund.

Both clubs had already reached an agreement over a transfer fee and the 23-year-old seemed set to continue his career with Dortmund at Signal Iduna Park.

However, the deal has now collapsed, with Mainz seemingly unwilling to part with the Turkey attacking midfielder during the January transfer window.

"The decision was not made based on finances, but rather we weren't sold on the overall idea. We had agreed a transfer fee with Dortmund, but the timing of the move isn't optimal for us.

"Yunus is not only our top scorer, but also an important part of the team. And we did not want to tear the team apart as it is."

Malli came through the ranks of the Borussia Monchengladbach youth academy, but left for Mainz in 2011 before breaking into the first team.

He has been one of the revelations of the Bundesliga season so far, scoring eight goals in 18 appearances and setting up one more.