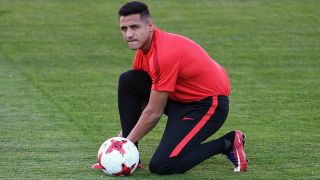 Claudio Bravo says Alexis Sanchez would be welcomed at Manchester City "with open arms" if he decided to leave Arsenal.

The striker's future remains far from certain, despite Arsenal manager Arsene Wenger insisting that he will not be sold either to a Premier League rival or another major European club.

Sanchez is expected back in training on Sunday after being given extended holiday following Chile's Confederations Cup campaign, although an Instagram post on Thursday in which he stated he was "sick" has cast some doubt over his return to the first team.

City have been linked with the former Barcelona man throughout the transfer window and Bravo would be delighted if Sanchez eventually sealed a move to the Etihad Stadium.

"If he decides to go, we'll wait for him with open arms at City," Bravo told 24 Horas.

Bravo's own future has been placed in doubt following the arrival of goalkeeper Ederson from Benfica in a €40million deal.

The 34-year-old endured a dismal first season in the Premier League but recaptured some of his best form at the Confederations Cup, making three penalty saves in the semi-final shoot-out victory over Portugal in Kazan.

Bravo admits he had not expected to play given his torrid form in early 2017 but is delighted with the performances he produced.

"I went to Russia almost with the idea of not taking part because I wasn't in good condition," he said. "I competed for my team-mates, who wanted me to play, and because I wanted to reverse the situation of not having had a good year."