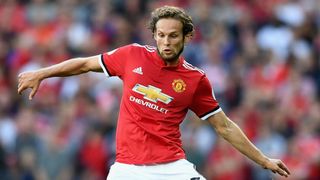 Daley Blind's return to Ajax is edging closer after Manchester United confirmed the two clubs have agreed terms on a transfer.

Blind joined United in 2014 after impressing with Netherlands at the World Cup under Louis van Gaal, who was behind his move to Old Trafford.

His versatility made him a dependable asset for Van Gaal and Jose Mourinho afterwards, playing in a variety of positions including centre-back, left-back and defensive midfield.

But, since Mourinho's arrival, Blind has rarely been considered an integral part of the starting XI, with the Portuguese coach seeming unsure as to his best position.

Blind, 28, featured just seven times for United in the Premier League last season as a result of injuries and being out of favour, with four of those appearances coming from the start.

United kept clean sheets in all of his starts, but with just one year left to run on his contract, a sale had been mooted for several months.

United are reported to be receiving an initial £14million for the Ajax academy product, but the fee could eventually rise to £18.5m.