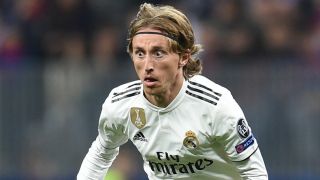 Luka Modric has been crowned the winner of the Ballon d'Or, capping a wonderful 2018 for the Real Madrid and Croatia midfielder.

The Ballon d'Or has been dominated by Cristiano Ronaldo and Lionel Messi for the past decade, the rivals winning the award five times apiece.

But Modric's impact in Croatia's run to the World Cup final, coupled with Madrid winning the Champions League for the third year in a row, saw him triumph.

Griezmann made it into the top three but he was beaten to second place by Ronaldo, who moved to Serie A champions Juventus from Madrid in July.

Messi finished fifth in the voting, with Griezmann's France team-mate Mbappe a place above the Barcelona star.

There was no place for Neymar in the top 10, with Paul Pogba and Madrid captain Sergio Ramos among the other big names further down the list.

Kaka was the last player other than Messi or Ronaldo to win the Ballon d'Or, the Brazilian claiming the title in 2007 while starring for AC Milan.

The 19th position is for three different players:Roberto Firmino The final ranking December 3, 2018